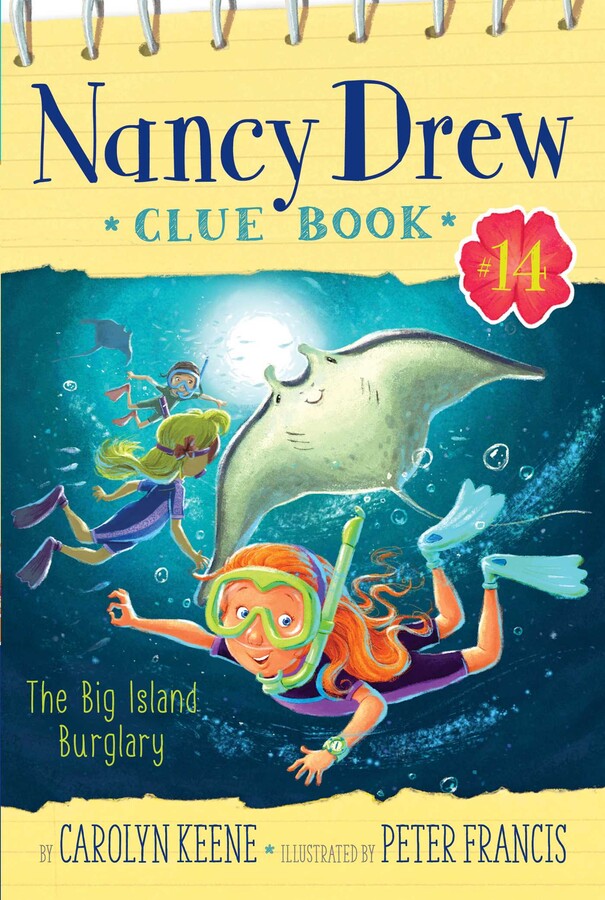 Nancy and her friends search for a stolen camera in the fourteenth book in the interactive Nancy Drew Clue Book mystery series.

Nancy is ready for fun in the sun when she joins Bess and George’s families on a trip to Hawaii. The girls are excited to take surfing lessons, swim with manta rays, and experience the beautiful sights of the Big Island. At a luau one night, the girls get to taste all kinds of yummy local specialties and are even invited up to help with a hula performance.

But during the show, one the other guests has his fancy camera stolen, and he’s sure someone there is the culprit. Luckily, Nancy, Bess, and George are on the case!

Can the Clue Crew see the big picture and zoom in on the thief in time to enjoy the rest of their trip? Or will this island adventure be a total washout?

Chapter One: The Marvelous Mantas Chapter 1 THE MARVELOUS MANTAS
Nancy Drew and Bess Marvin peered over the side of the boat. The water was so dark, they couldn’t see anything below the surface. Bess clutched her life vest and stared at Nancy.

“Do you think there are sharks?” she asked nervously.

“Of course there are sharks. It’s Hawaii!” George Fayne called out behind them. She leaned back in her seat and shrugged.

“Stop scaring your cousin,” Mr. Fayne said. “We’re all going to be just fine. You think I brought you out here to get eaten?”

Nancy looked off into the distance. Up ahead, a few other boats had anchored in a cove and a bunch of people had jumped into the water. They were all wearing life vests and snorkel masks. As soon as she saw them, Nancy wasn’t worried. Some of the kids in the groups looked like they were only six or seven. They were smiling and laughing.

They didn’t seem nervous about getting into the ocean at night.

“What do the manta rays look like?” George asked their boat’s captain. “Are they gray like sting rays?”

Captain Tane shook his head. “They’re black and white. They have spots on their bellies and huge mouths. That’s how they eat the plankton.”

“What’s plankton?” Nancy asked. She’d heard that word before, but realized she didn’t really know what it meant.

“Plankton is what a lot of the big fish feed on,” Captain Tane said, scratching his goatee as he steered the boat. He was a round man with thick black hair. “It’s lots of tiny sea creatures—eggs and little crustaceans. They’re so small, you can’t see them.”

“Can the manta rays’ tails hurt us? Are they sharp?” Bess asked. She was still staring into the water, looking worried.

“Nah. They don’t have barbs or stingers. The mantas are gentle creatures,” Captain Tane said. “They’re called the ‘butterflies of the ocean.’ I think you’re going to love them.”

That seemed to make Bess feel better. Ku, the first mate, passed her a pair of flippers, and she sat down on the bench to put them on. Soon their boat was gliding into the cove to join the others.

Nancy had only been snorkeling once before, with her dad. When George’s parents invited her on their summer vacation to Hawaii, she knew it would be the first for a lot of things. From the moment they stepped off the plane, it had been nonstop fun. They were staying on the Big Island, which was just like its name—the biggest island in the Hawaiian island chain—and there was so much to do and see. On Sunday, they’d taken surfing lessons. Nancy had even managed to get up on the board and surf a tiny wave all the way to shore. Then Mrs. Fayne took them on a long hike through the jungle. It was so green and beautiful, Nancy felt like she was walking through a movie set. Tomorrow, they were going to a luau, which was a special Hawaiian feast.

That night, Mrs. Fayne and Scotty, George’s three-year-old brother, stayed back at the hotel. Scotty was way too young to swim with manta rays, and Mrs. Fayne seemed happy to have an excuse not to go. Nancy wondered if she was as nervous as they were about getting into the water at night.

“What are those for?” Mr. Fayne asked.

As they got closer, they could see that each group had a guide and a surfboard covered in blue lights. The water in the cove was glowing.

“Blue lights attract plankton,” Ku said. “The manta rays will swim up for a snack. You just have to hold on to the board. Then you watch and wait.”

“Everyone ready?” Captain Tane asked. He parked the boat beside the others.

George was still fiddling with her snorkel, and her dad had to adjust the strap for her. “Ruddy as ull avaa beee,” she said through the mask.

Ku climbed down the ladder at the back of the boat and plunged into the water. He was short and muscular, and was such a good swimmer, he didn’t need a life vest. He pulled the surfboard down with him and turned on the blue lights.

“This is going to be great, girls,” Mr. Fayne said as he jumped in behind Ku. He grabbed on to the surfboard, which had handles along the sides. They waved for Nancy and her friends to follow.

“Eeeeeeeeeek!” Bess let out a squeal as she jumped in.

Nancy and George climbed down the ladder and swam out to the surfboard. The water wasn’t as cold as Nancy thought it would be. All around them, people floated onto their bellies, their masks in the water as they waited for the manta rays.

“Hold on with both hands, just like this,” Ku said as he grabbed two handles on the side of the board. He kicked his legs and lay flat.

Nancy and Bess went on one side of the surfboard and George and her dad went on the other. They stared into the water below. Nancy could hear each of her breaths through the snorkel.

They waited… and waited. Nancy started to get a little cold and suddenly wished she’d worn the wet suit Ku had offered her.

All around them, other groups clustered around their surfboards. Just when Nancy was sure nothing was going to happen, she saw something swimming toward them.

“Ahhhhhhhrrrghh!” Bess yelled through her snorkel.

As the creature got closer, Nancy saw its huge, gaping mouth. It was like a giant sting ray. Its mouth was so big, it looked like it could swallow Nancy whole.

Nancy raised her head from the water, suddenly nervous. George and her dad were both still floating on their stomachs and watching the manta. She put her head back down so she wouldn’t miss anything.

The creature swam closer and closer, and Nancy’s stomach twisted into knots. It was so huge and coming right toward her. When it was a few feet away, it dipped down under them and did a backflip. Its belly was covered with dozens of black spots!

Nancy could see into its gills as it flipped around again and again, taking in huge mouthfuls of plankton. A second manta ray swam up next to it and started doing the same thing. She understood now why people called them “the butterflies of the ocean.” They were so graceful. With all their flipping, it seemed like the manta rays were dancing together.

The group kept watching for almost an hour. When the first manta rays swam off, new ones swam over, feeding on the plankton beneath the board. Every minute was better than the last. Ku and Captain Tane had to call Nancy and Bess several times before they picked their masks up out of the water.

“That was incredible!” Bess said.

As they swam back to the boat, Nancy couldn’t stop smiling.