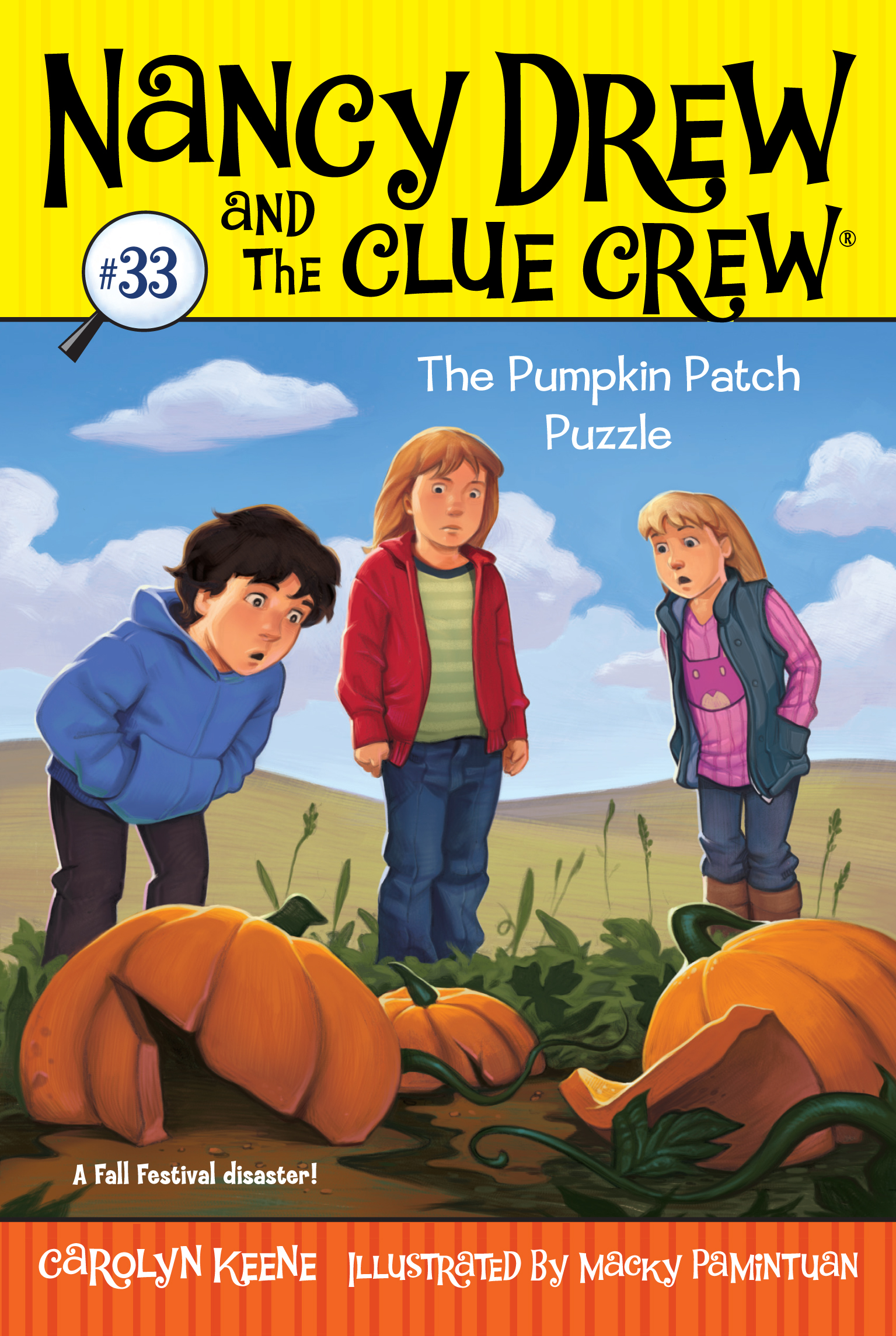 When the plans for the annual pumpkin decorating contest are smashed, Nancy Drew and the Clue Crew are on the hunt for a Fall Festival felon.

It’s autumn in River Heights, and that means it’s time for the annual Fall Festival! Nancy, Bess, and George are excited for a whole week of games, rides, delicious treats, and the famous pumpkin-decorating contest. They are all participating for the first time this year!

But the day the girls are set to compete, all the designs for the contest are stolen and the decorating supplies are destroyed. If the culprit doesn’t come forward, the contest will be canceled—and a River Heights tradition will be ruined. It’s up to Nancy and the Clue Crew to solve this pumpkin patch mystery!

“Ugh, I can’t wait for the end of the day!” exclaimed eight-year-old Nancy Drew.

“We have important things to do,” added her friend Bess Marvin.

“Well, let’s try to have fun and maybe the school day will go by faster!” said George Fayne.

It was a couple of days before the kickoff to the annual Fall Festival in River Heights. The festival was the highlight of the year for most, if not all, of the River Heights residents. There were all kinds of rides, games, food, and different fall-themed events for a week. The biggest part of the festival was the pumpkin decorating contest, which was on the first day of the festival. On the last day, the winner was announced—and would have the honor of having his or her design on all the banners and ads for next year, when the festival would be celebrating its fiftieth anniversary! The contest was open to kids as young as eight years old, and this was the first year that Nancy, Bess, and George would be entering.

“I can’t wait to decorate our pumpkins,” said George. “I need to start thinking of my design.”

The girls were going to Nancy’s house right after school to begin planning how to decorate their pumpkins. In order to be in the contest, anyone who wanted to compete had to submit their design idea to the festival committee by that Friday, before the festival’s opening day and the actual contest, which would be on Saturday. The girls couldn’t wait!

“Maybe I’ll make mine look like a lion or tiger,” George continued. “I think that would look really cool on a pumpkin.”

“You want to put a big cat on your pumpkin? How dumb is that?”

The girls turned and saw Deirdre Shannon, one of their classmates—and one of the meaner girls at school—sitting at the cluster of desks right behind them.

“It’s not dumb, Deirdre. Besides, you probably don’t even have an idea for your design,” said Bess.

“Whatever, girls,” Deirdre said. “But you all better watch out, because I’m winning that contest and you will have to look at my design for the whole festival next year!”

“Just ignore her, Bess,” Nancy said reassuringly as Deirdre turned around to chat with the rest of the kids in her group. “I think your idea could be really cool, George!”

Bess sighed. “I still don’t know what to do. I really want my design to be the winning one—I mean, I want you guys to maybe win too,” she added quickly.

Nancy and George laughed. “Well, hopefully everything will stay quiet around here so we can concentrate on our designs,” Nancy said.

Nancy, Bess, and George were known around town for helping to solve mysteries in River Heights. Not only were they best friends (and George and Bess were cousins), they also had their own detective agency. They called themselves the Clue Crew—and had a pretty good success rate! Even though the girls were very different—Nancy was levelheaded, George was considered the “computer geek,” and Bess was very fashion-conscious—they worked perfectly together and made a great team!

The girls chatted as they settled into their desks. But instead of the normal start with reading assignments, their principal, Mr. Newman, came in with a girl Nancy, George, and Bess had never seen before.

“Oh, I wonder if we have a new girl in class,” whispered Nancy.

“Good morning, everyone!” said Mrs. Ramirez. “I want you all to give a big River Heights Elementary welcome to Emma Costello. She just moved here from California and will be in class with you all.”

Emma had big green eyes and curly brown hair. She was wearing a fun pink-and-brown dress, and cute shoes. She seemed a little nervous as she looked out at her new classmates.

“That must be hard moving all the way from California,” said Bess.

“Hey, maybe she can come over after school and decorate some pumpkins with us,” said Nancy. “That way, she can meet some more kids from class—and see the best part about the festival!”

Finally, the end-of-day bell rang, and the three girls hurried off toward their lockers to grab their things before heading over to Nancy’s house. They were ready to start sketching out their ideas, and thought doing a little practice run on their own pumpkins would be a good idea before the big day. Besides Bess and George, Nancy had invited a few other classmates to come over as well.

“Hey, guys! Are you on your way to Nancy’s house?” Violet Keeler called out.

“Yup! We’re just waiting for Hannah to come pick us up so we can walk back with her,” explained Bess. Hannah Gruen was the longtime housekeeper and family friend to the Drews’, and a second mom to Nancy. “I’m not sure if we are waiting for anyone else.”

At that moment, Nancy came to the lockers where the girls were standing.

“We have one more—everyone, you remember Emma,” Nancy said. “I thought it would be cool if she could decorate the pumpkins with us!”

“Hi, Emma! Do you know what you want to do with your pumpkin?” asked Bess.

Emma shrugged. “Um, I’m not really sure,” she said. “I’m not a big fall person.” She pushed a stray brown curl out of her face.

“Aw, well, I’m sure you’ll think of something once we get started,” said George.

Emma frowned. “Whatever—it’s cool of Nancy to invite me over, but I’m not really into this whole festival thing. I think it’s stupid!”

“Oh, look, there’s Hannah,” Nancy said, sounding relieved at the interruption. “Let’s get this show on the road.”

As the rest of the group chatted during the walk, with Hannah keeping a close eye on everything, Bess and George pulled Nancy aside.

“Well, she’s just getting used to River Heights,” Nancy pointed out. “It’s not easy being the new girl. So maybe she’ll be better once she gets to know everyone.”

Suddenly a few of the girls screamed. “Look out! There’s a ghost coming right at us!”
Carolyn Keene

Macky Pamintuan was born and raised in the Philippines. He moved to San Francisco at age twenty-one and received his fine arts degree from the Academy of Art College.

More books in this series: Nancy Drew and the Clue Crew