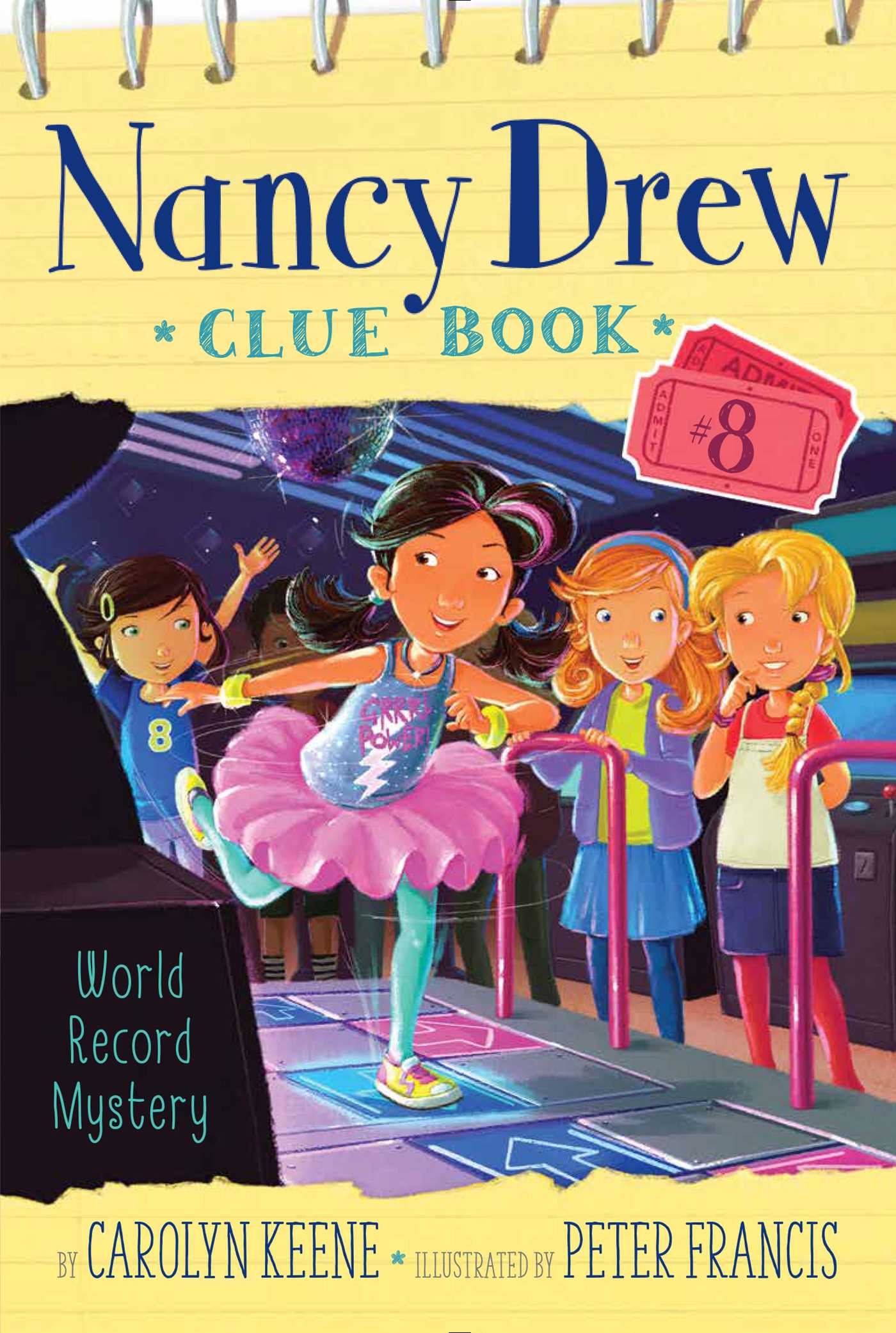 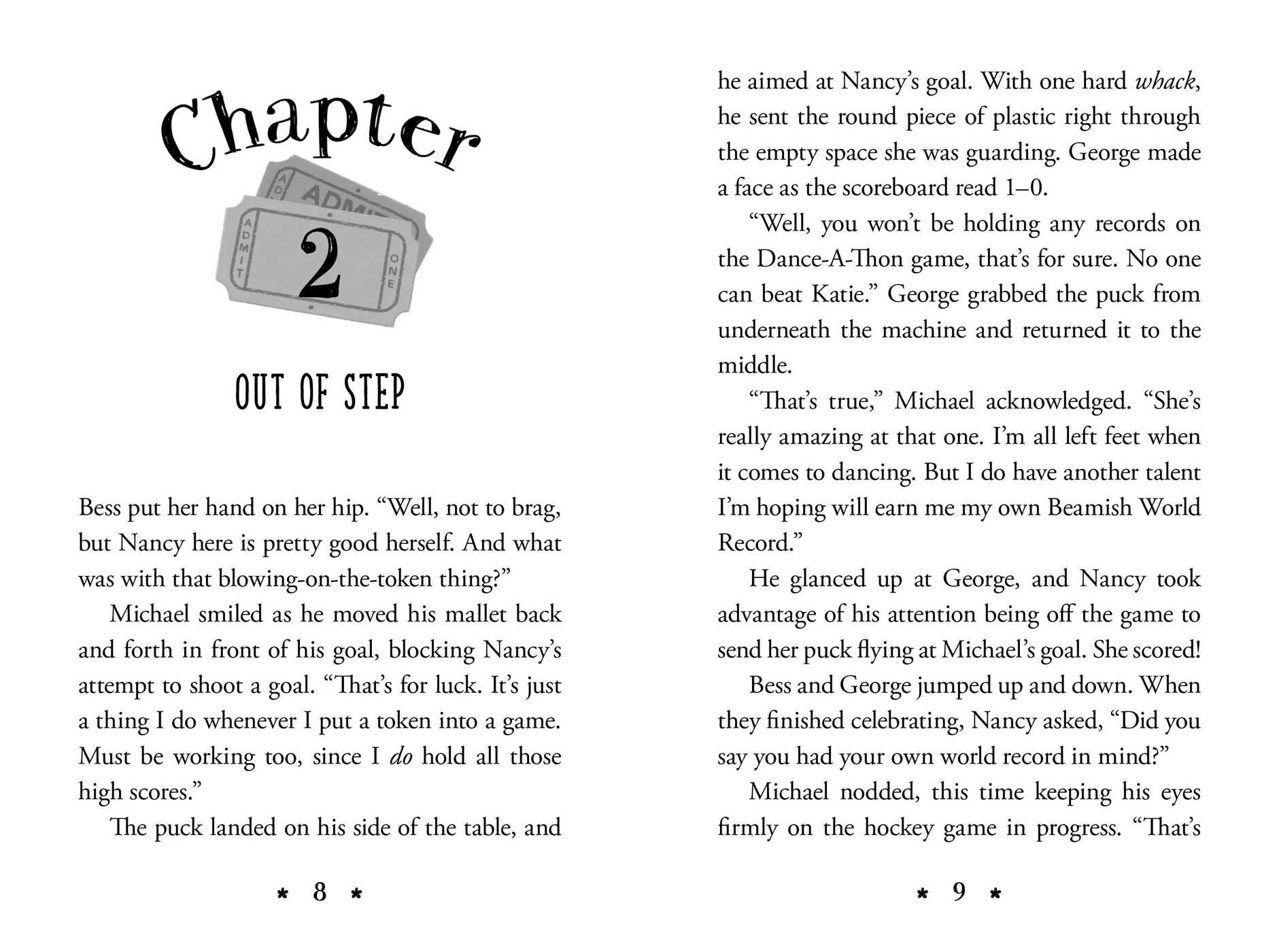 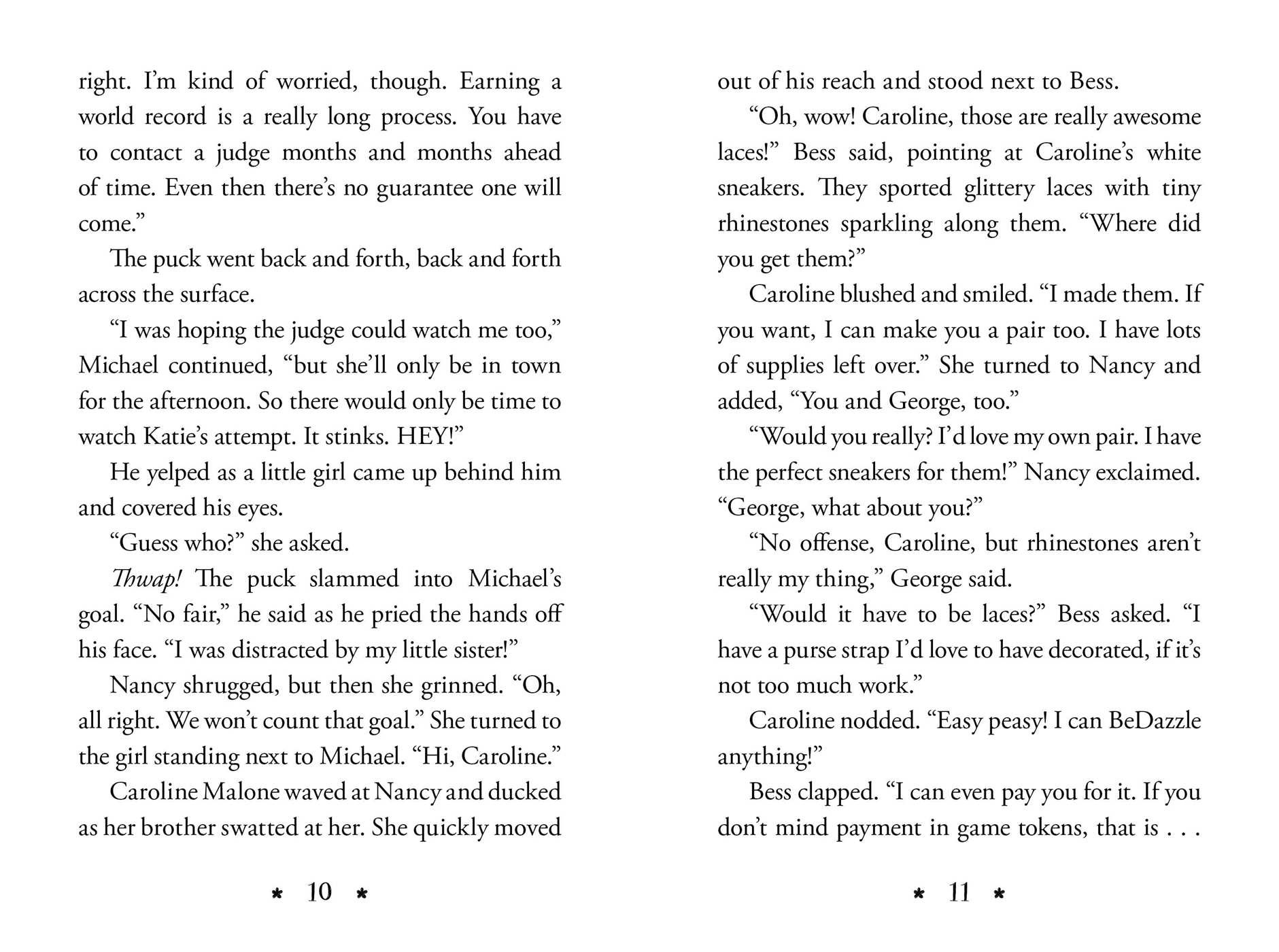 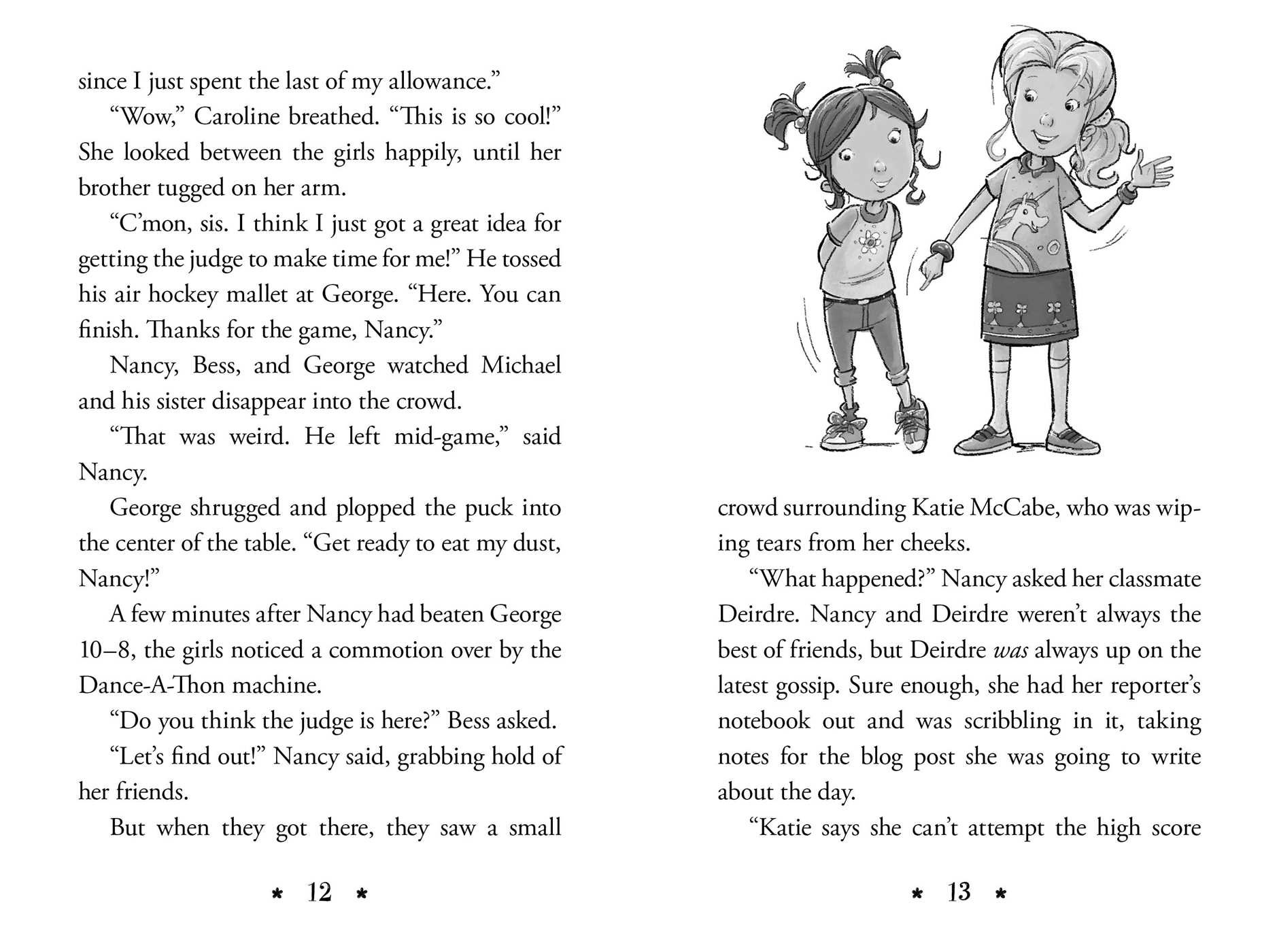 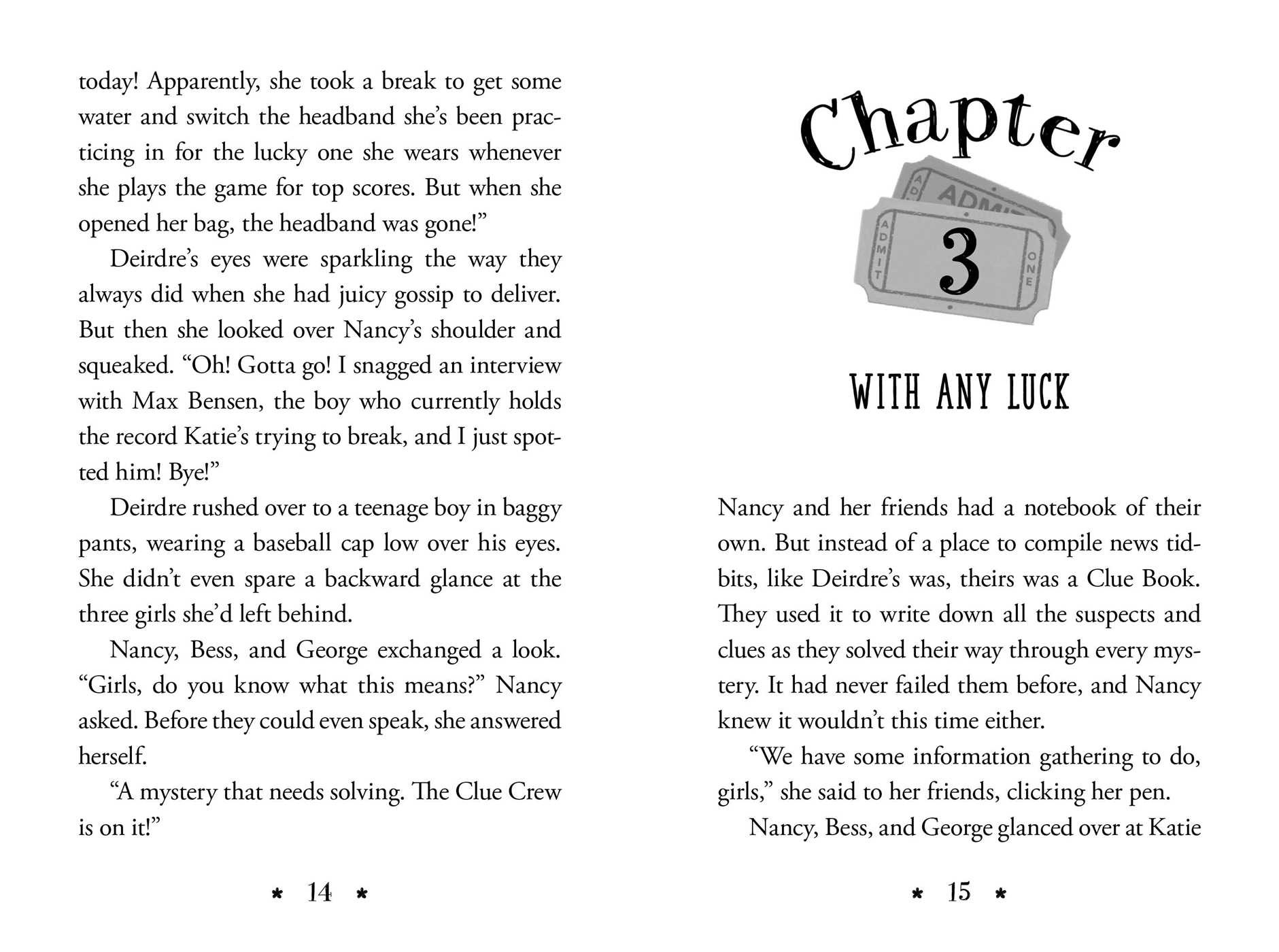 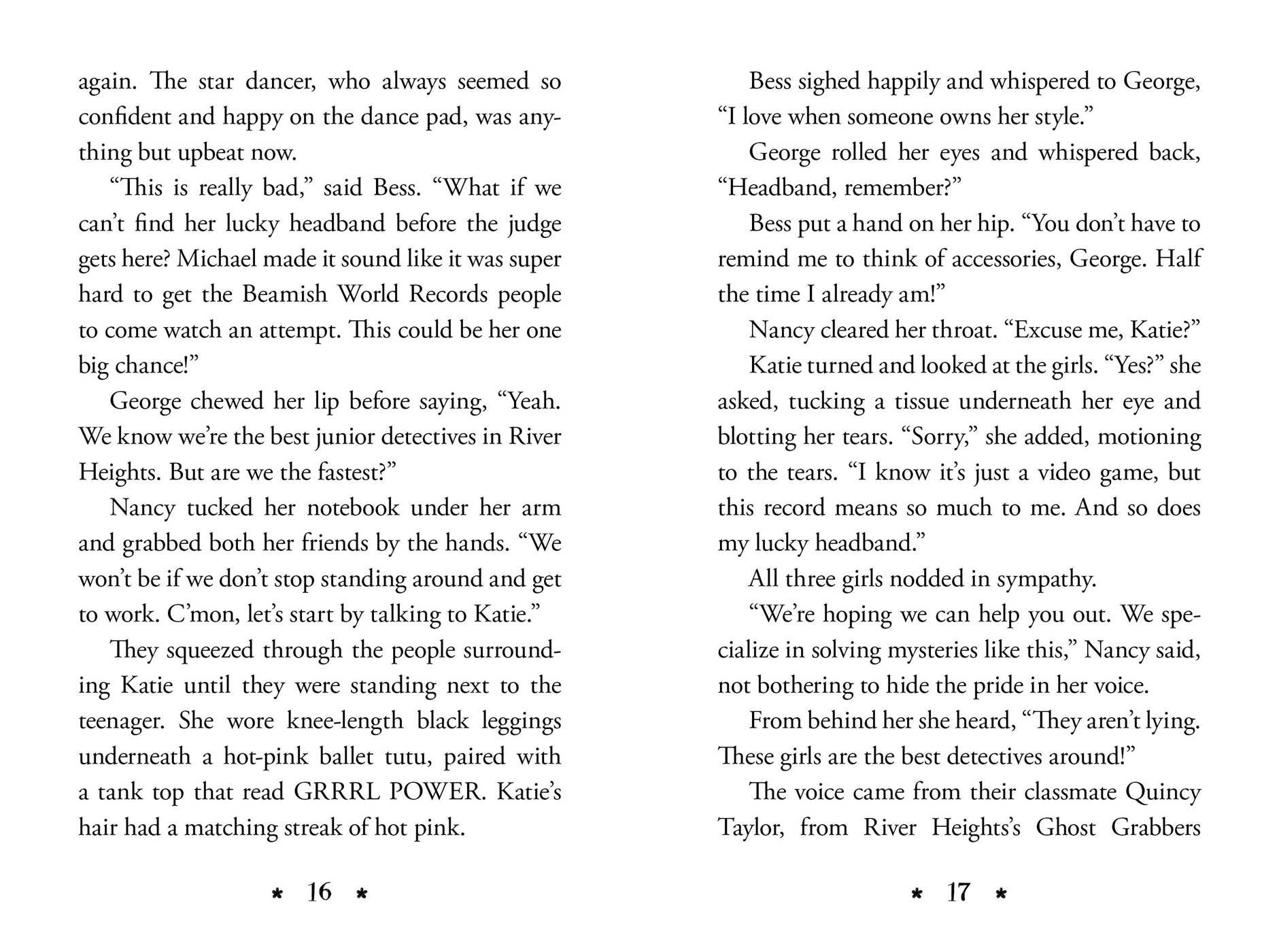 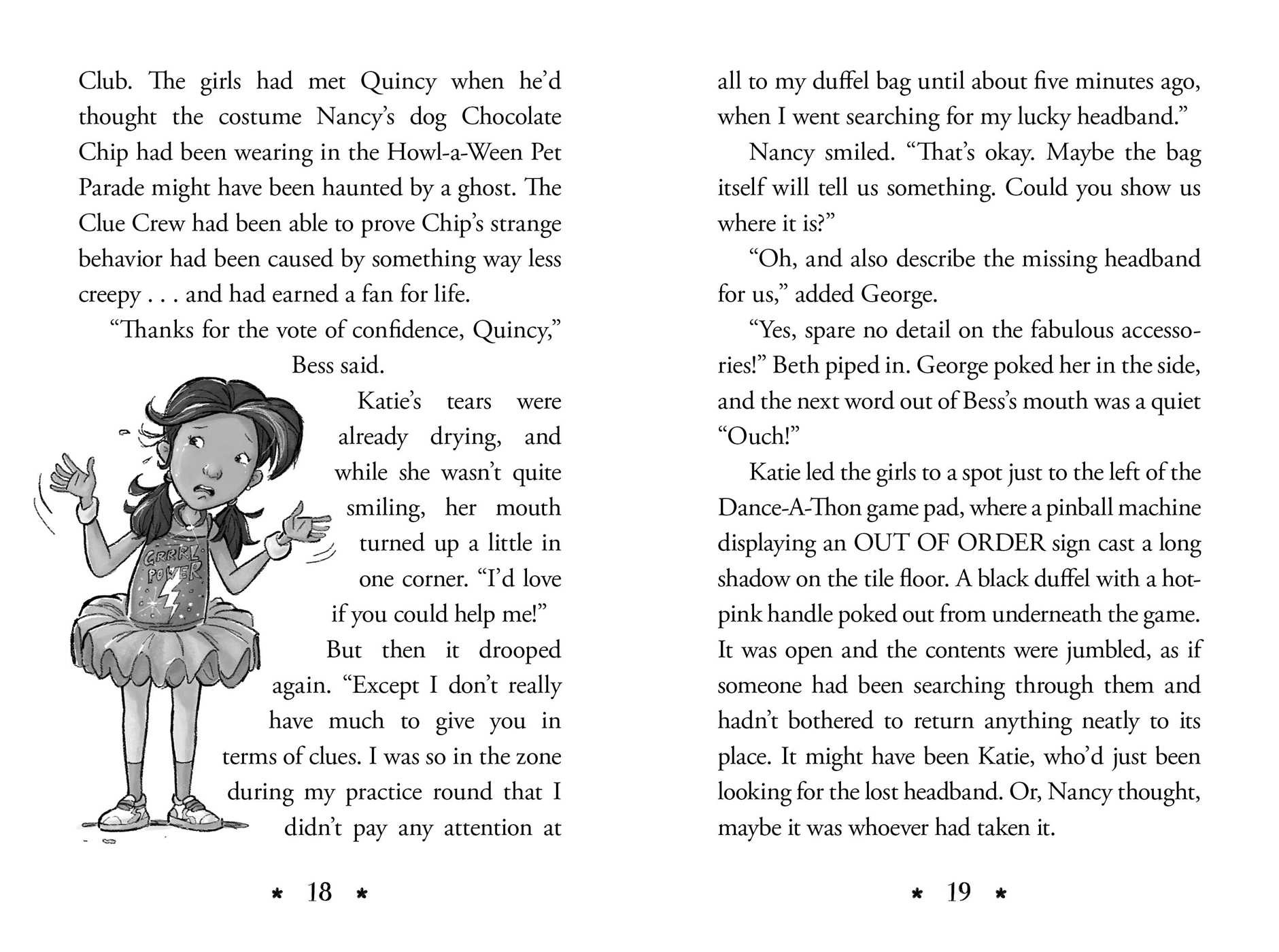 Help Nancy and her friends find a missing lucky headband so River Heights teen Katie can break the world record at the local arcade’s dance game in the eighth book in the interactive Nancy Drew Clue Book mystery series.

Everyone in River Heights has shown up to watch Katie McCabe try to beat the world record for the Dance-A-Thon game. Judges are coming to the arcade to see how quickly she can spin across the electronic dance floor and how many points she can win.

But just as Katie’s about to get ready, she notices her lucky headband has gone missing! She always wears the blue, sparkly headband when she competes and knows she’ll bomb without it. Luckily, Nancy takes her Clue Book everywhere. Nancy, Bess, and George are on the case! Who is sabotaging Katie’s big day? Could it be the owner of the rival arcade, Michael Parker, who wanted the judges to see his world record sock attempt? Or May Bensen, the current Dance-A-Thon record holder? It’s up to the Clue Crew—and you—to find out!

Nancy Drew and her best friends, Bess Marvin and George Fayne, joined the rest of the crowd at Starcade cheering for River Heights teen Katie McCabe as she spun across the electronic floor pad of the Dance-A-Thon video game. The local arcade was full of fans watching the gaming whiz practice her moves. Katie’s feet flew over the lit-up squares, and she added arm movements to match the rhythm. In just a few hours, a judge from the Beamish Book of World Records would be there to record Katie’s attempt to break the current high score!

“This is so exciting!” exclaimed Nancy.

“I hope by the time I’m sixteen I can dance like Katie,” Bess said. She tried out a kick step and almost crashed into George.

Nancy laughed. “Good thing you have a few years to practice. I think you might need them.”

Nancy and her friends were eight, and even though they didn’t have dance moves like Katie, they were already experts at one thing: solving mysteries. Nancy, Bess, and George called themselves the Clue Crew.

George shook her head, causing her short dark hair to flop this way and that. “I know dancing takes a lot of athletic skill, but I’ll take soccer over sashaying anytime.”

George was the tomboy of their group. She and her cousin Bess were as different as night and day, but that didn’t stop them from being as close as could be.

Bess pulled her blond hair into a ponytail and fastened it with a sparkly clip. “I just hope the judge hurries up and gets here.”

Nancy laughed at her eager friend. “I hate to tell you, but I heard that the judge isn’t scheduled to arrive for a couple of hours. That just means we have time to play some games of our own, if you want.”

George led the way to the change machine that let them exchange their allowance money for game tokens. “How about some Skee-Ball to start?” she suggested. “It’s my favorite.”

The three girls took turns bowling at the Skee-Ball game. Bess got three balls into the tiny opening worth one hundred points and collected six tickets when the game ended.

“I’m saving up for the lava lamp I saw behind the prize counter,” she said. “It will look super groovy in my room! And the base is pink—my favorite!”

“You’ll need to win a lot more games to have enough tickets for a prize that big, Bess,” Nancy said, handing her friend the three she’d scored.

“I have that same lava lamp in my arcade, and it costs seventy-five fewer tickets than here.”

The girls turned around to find Christopher Finn, the owner of Gamespot, just behind them. His arcade was down the street and was another popular hangout spot for the kids in River Heights.

“Sorry to eavesdrop,” Mr. Finn said, stuffing his hands in his pockets. “It’s just so crowded in here, I couldn’t help but stand close.”

Nancy was jostled again, this time by a kid racing past her to the photo booth. She grimaced. “That’s okay, Mr. Finn. There are a ton of people in here today.”

“Tell me about it,” he replied. “My arcade’s practically a ghost town this morning. Everyone would rather be here, cheering on Katie. I sure wish I had the Dance-A-Thon game at my place.”

Mr. Finn hung his head and shuffled past the girls. Bess, Nancy, and George shared a sympathetic look, but it took only a few moments for them to get back in the mood to play.

The arcade was full of energy and sounds: bells, dings, chimes, laughter, and happy squeals!

Nancy was a pro with the giant padded hammer as she earned eight tickets at Whack-A-Worm. Next the girls climbed into plastic cars that moved them side to side and up and down as they raced each other on big screens in front of them. Bess and Nancy leaned into the racetrack turns while George yelled at her car to go, “Faster, faster!”

When they were done racing, Bess and George played against each other in air hockey. For two girls so different, their skills were well matched and the game ended in a tie score.

“Hmm, I know we said I’d play the winner, but how will we pick now?” Nancy asked, rubbing her chin.

The girls spun around to see Michael Malone holding up a game token in his hand. Michael was in fourth grade and a close buddy of Ned Nickerson, one of Nancy’s friends.

Michael held the token up to the sky and blew on it, before dropping it into the air hockey machine and pressing start.

“Not to brag too much, but I’m good at every game. I have the high score on three of the machines here.”

He flipped the red puck in his hands before setting it onto the center of the table.
Carolyn Keene